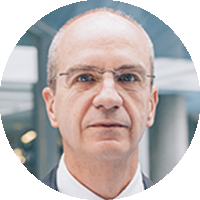 Holding a Ph.D. in Physics and a Ph.D. in Chemical Engineering from Université Laval, he completed a post-doctoral fellowship with GE Canada and management training at the MIT Sloan School of Management. He is a registered engineer in the province of Quebec.

Between 2009 and 2017, he worked for the international energy company Total in France and Germany, serving in several top R&D executive positions. His activities focused on the strengthening of corporate science policy including open innovation, the internationalization of research expertise sourcing, and the establishment of links with public research globally. He also promoted strongly the development of clean energy pathways and supporting technologies in advanced materials, new processes, and system analysis.

Prior to this, he had pursued a 25-year academic career in several universities in Canada, including 15 years as an industrial research chairholder and head of a R&D center in process engineering at Polytechnique Montreal.

Conference: Applications of Artificial Intelligence for Products and Technologies - From Silicon Valley to Quebec

Symposium: Competitiveness 4.0 and Artificial Intelligence: Are you ready?