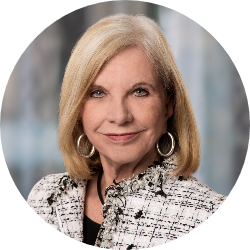 A CIRANO Invited Fellow, Monique Jérôme-Forget is a Special Advisor in the Montréal office of the business law firm of Osler, Hoskin & Harcourt LLP.

Holding a Ph.D. in Psychology from McGill University, she served as Minister of Finance, President of the Treasury Board and Minister responsible for government services under Jean Charest’s Liberal government. In addition, she has been Assistant Deputy Minister of Health and Welfare in Ottawa, Vice-Rector of Finance at Concordia University, President of the Commission de la santé et de la sécurité du travail and Chair of its related research institute, as well as President of the Institute for Research on Public Policy (IRPP) (a national think tank). She was a member of the Quebec National Assembly from 1998 until 2009. In the wake of the 2008 financial crisis, she played a key role in a joint effort by the Quebec, Alberta, Ontario and federal governments to provide guarantees to holders of asset-backed commercial paper. In 2010, she was appointed by Finance Minister James Flaherty to his Economic Advisory Council which is made up of eleven high profile members from across Canada. Since 2013, she has served on the Board of Directors of the Bank of Canada and also chairs the Human Resources and Compensation Committee. She is an active participant on the Executive Committee as well as the Capital Projects Committee. She also has been part of a task force that examined the measures to put into place in order to allow Quebec businesses to better protect themselves from hostile takeover bids and foster the development of head offices.

She chaired the Social Policy Committee of the Organisation for Economic Co-operation and Development (OECD), and is the current Chair of the Board of Directors of the McCord Stewart Museum. In 2012, she was appointed Officer of the Ordre national du Québec and was chosen “Woman of Outstanding Achievement” by the Women’s Y Foundation in 2013. She also sits on the boards of the Institut de recherches cliniques de Montréal (IRCM), of the Foundation of Greater Montréal (FGM), of Cinemania, of the Groupe de travail sur la protection des entreprises québécoises (GTPEQ) and of the Quartier de l’innovation. She has also served as a member of the Board of Directors of Canada Life and of Astral.

She is the author of several publications, most recently Les Femmes au secours de l’économie : Pour en finir avec le plafond de verre (Women to the Rescue of the Economy: Getting Rid of the Glass Ceiling, available in French only), which promotes the rise of women to the highest ranks of power.