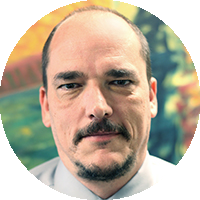 A CIRANO Associate Researcher and Fellow since 2005, Andre Costopoulos is Vice-Provost and Dean of Students at the University of Alberta.

Holding a Ph.D. in Archeology from the University of Oulu, he is active in the areas of evolution of social complexity, human adaptation to environmental change, quantitative and computational methods in archeology, agent-based simulation in anthropology, and prehistoric exchange networks.

Andre Costopoulos began his career in 1999 as a Visiting Assistant Professor in the Department of Sociology, Anthropology and Social Work at Eastern Connecticut State University. He joined McGill University as a Research Associate and Sessional Instructor in the Department of Anthropology in 2001, before becoming an Assistant Professor in 2003. He served as McGill's Dean of Students from 2012 to 2016. He joined the University of Alberta in July 2016.

He has conducted fieldwork in Finland, in the James Bay area of northern Quebec and in southern Quebec. He developed a firm commitment to student affairs early in his academic career and has held a series of progressively senior roles in this area, beginning as an academic adviser in his department, moving on to chairing the undergraduate committee in his department, sitting on the curriculum committee in the wider faculty, becoming associate dean for student affairs in the faculty, then ultimately becoming dean of students for the University of Alberta.

[ - ]
[ + ]
University
Vice-Provost and Dean of Students, University of Alberta