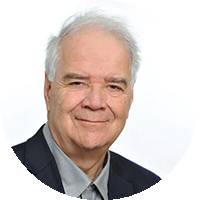 A CIRANO Invited Fellow, Jean-Marc Rousseau is Director of Technology Transfer at the Institute for Data Valorization (IVADO).

Holding a Ph.D. in Operations Research from the Massachusetts Institute of Technology in 1973, Jean-Marc Rousseau taught at the Université de Montréal Department of Computer Science and Operations Research (DIRO) from 1973 to 1992, and led the Université de Montréal Transport Research Centre (now CIRRELT) from 1979 to 1987. He co-founded GIRO Inc. (1979), a company specializing in the development and marketing of software aimed at increasing productivity, in particular for public transit scheduling and collection and delivery routes. He was President and CEO of CIRANO from 2002 to 2005 and President and CEO of the Réseau de calcul et de modélisation mathématique (Rcm2) from 2005 to 2009. A member of Anges Québec since 2011, he advises start-ups and sits on several boards and advisory committees. He has authored more than 80 scientific publications and been awarded 13 prizes and distinctions during his academic and professional career.